As Speech Coaches, we look at how the art of communication persuades a voter. Have you thought about how communication style impacts a voter’s perception? By style we mean: how someone comes across to their listeners. Forget about the healthcare, balance of power in the white house, and messaging for a moment….Let’s look at the communication reasons why some Massachusetts voters eagerly checked the box next to Scott Brown on the ballot. Simply said, wrong style, not enough smile.

In Massachusetts in 2010, Martha Coakley did anything but come across as conversational and approachable on the campaign trail. Instead she came across as arrogant and elitist. Now wait a minute, we’re not saying Martha Coakley is arrogant and elitist, as a speech coaches, we’re more selective with our language than that, she “came across” that way. And in some circles, that will be ok, it will translate into confidence. In the job of an Attorney General, this serves a purpose. But when it’s a political female candidate, and your competition is already shouting from the rooftops, “Liberal arrogant elitist”… and then you “sound that way”, it solidifies the perception.

What do we mean by sound that way?

Often when Coakely spoke in public, her tone and inflection did not match the message. This does not indicate if she was sincere or not, it simply projects the impression that she is not, Remember, it’s all about perception.

Add to that, it’s been our experience at the firm that women have a more difficult time projecting a consistent confident, authoritative and approachable style. The attempts are often seen as arrogant or condescending. There must be a strong use of Pathos, emotional appeal, as well. One woman who is perceived as succeeding in creating an approachable, even charismatic style is Michelle Obama, what strikes you about her? Yes… it is her Style and Smile…

What could Coakley have done more of?

-Incorporate more nonverbal communication such as more smiling and larger gestures. –
-Use language that evokes more emotion
-Vary the tone and inflection in her voice to project a more approachable and sincere style

These are very specific mannerisms that many speakers need to learn, even in business.

Brown came across as comfortable, confident and down to earth. Why? Well, keep in mind, he did not need to influence voters in North Carolina, only in New England. The single most identifiable verbal trait of a New Englander is to drop the “r”. “Pahk ya cah in hahvad yahd.” Brown has a keen skill to turn this on and off in a way that has him described as articulate!

Brown’s use of nonverbal communication was very effective. Often seen with a smile or an engaged look, he appeared conversational and approachable. Now add some strategic placement of issues and messaging and you have a formula for success.

Any candidate who is running for office should look carefully at the way he or she speaks. This is not about pretending to be someone your not. It’s about knowing your listeners.

“For 45 years, Paula and I have been holding the reigns for all the operating functions of the firm. We will continue to coach and remain infuential in the firms decisions as we hand over the day to day operations to the next generation,” said Dr. Dennis Becker. Dr. Paula Borkum Becker added “Kristen has been with the firm for 18 years and heavily involved in the daily operations, from engaging with clients to back end office to billing and other company needs. Ethan has really expanded the thinking of the firm, bringing in new technologies and clients from all corners of the world. I’m excited about the engery and expertise they will bring for the next 45 years.”

Ethan, 38, holds an undergraduate degree in Communication, a graduate MBA with double focus in International Business Communication and Leadership. He is currently enrolled in a PhD program in The Psychology of Business Communication. He has been a senior coach and trainer with TSIC since 2001. Prior to joining TSIC he held positions as Project Director and Team Leader for Media One Hundred. Ethan has also held positions as a motivational trade show speaker for major corporations. In addition, he began his career as a corporate video producer, and music video producer.

Kristen holds an undergraduate degree in Speech Communication, and a graduate degree in Training and Development. Before assuming her role as senior trainer and coach, she worked in advertising and marketing, and served as Director of The Customer Service Training Center. During her 18 years of service to TSIC, she has initiated many policies and pioneered many programs, including the worlds’s first, and TSIC patented, Virtual Reality Therapy regime. She has strong integral knowledge of the inner workings that keep the firm strong and thriving.

“We are all excited about the transition to these two highly qualified and dedicated professionals. It represents the foundation for growth and the clear continuation of the firm in its mission to help all people strengthen their oral communication skills. Kristen and Ethan hold the respect of everyone on the team and we support the move 100%,” said Monica Murphy, a Senior Coaching Partner with TSIC since 1990.

and advising. I’m tired. I had hoped to hit the pool, but it’s raining.

Basically, I’ll donate money to the Mandarin Hotel, who hosts this event, and the Mandarin Hotel will send a shopper to the mall to full fill the wish. During our busy day to day lives, trying to provide for our own families, and make a living, enjoy life, and such…

Today after work, I saw a “Make a wish” box in the lobby while waiting to attend a client dinner coaching session. It was a box with a few hundred wishes from local orphans. I picked one up, and read it. It was from a 6 year old girl. The age of my oldest Daughter. She wrote on her make a wish card. “I wish I could have a new t-shirt, and a pair of sock for Christmas” My eyes swelled up. And then my client walked in. I’ll check back tommorow, they will be there all week.

Ethan Becker is on his way to Malaysia to work with SuriaKLCC. He will be sending regular updates on his trip in a series we titled: “Kuala Lumpur Journal”. 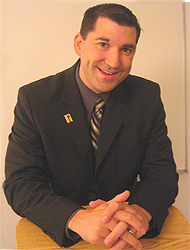 Four flights, 1 entire season of 24 and 36 hours later, Ethan landed in Kuala Lumpur, Malaysia. Ethan is working with Executives to help them strengthen their managerial communicaiton skills. This is follow up work with the team that has shown incredible improvement over the years.

The weather is hot, and humid. Boston of course, is much colder. Back home it’s snow and shoveling while here it’s rain and warmth.

I find it amazing how similar people are around the world. When I travel, I meet and profile people along the way. I’ve met people from countries and cultures all over the world. It’s a real lesson to get to work with so many cultures and see how human beings are similar and different. END_OF_DOCUMENT_TOKEN_TO_BE_REPLACED