Posted at 6:12 pm in by George Matson 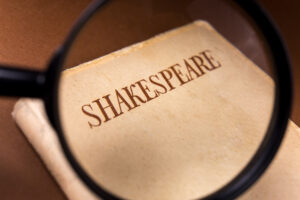 For hundreds of years in the English language, the most powerful and memorable means of expression has been the reliance on one or two-syllable words.

Many eloquent speeches, poetry, and plays have this common strain: three out of four words are one and two syllables. Consider Shakespeare’s famous “Coward’s Die” soliloquy as an example of the 75% rule.

“Cowards die many times before their death. The valiant never taste of death but once. Of all the wonders I yet have heard, it seems to me most strange that men should fear, seeing that death, a necessary end, will come when it will come.”

In this passage, over 97% of the words are one or two syllables.

Polysyllabic words should be used sparingly if you wish your speech to be powerful. It is difficult to reconcile a forceful delivery with long words. For example, the following paraphrase from Shakespeare’s work would have little impact on the listener: “Our existence aimlessly proceeds at a painfully lethargic rate as each day meanders pointlessly toward the receding horizon.”

How much more forceful it was for Shakespeare to have had his character say, “Tomorrow and tomorrow and tomorrow creeps in this petty pace from day to day, till the last syllable of recorded time.” In a weak paraphrase, eight out of eighteen words are polysyllabic. In Shakespeare’s deft writing, only five out of twenty words are polysyllabic (fifteen of twenty – 75% – are one or two syllables).

One of the reasons people don’t use short words is the misconception that simple language conveys simple-mindedness. Most eloquent passages prove this assumption to be false. So do yourself a favor; try the short word route in your quest for a powerful speech. People will take notice, and you will leave a better imprint.