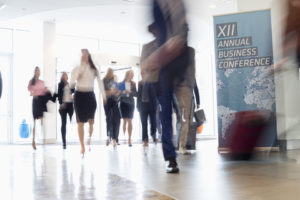 Very recently, Rebecca Robbins, a San Francisco Correspondent, shared a report about an organization that wanted to take a different approach at an upcoming scientific gathering. Planners decided to only invite female speakers to the microbiome conference at the University of California, San Diego, thus igniting a major controversy.

As a woman, mother, and corporate executive, it is my opinion that women-only events don’t make sense. Now, before you throw a laptop at me, hear me out. I’ve been thinking deeply about this subject, especially with March being Women’s History Month, and International Women’s Day on March 8, 2019.

It seems clear that the event at the microbiome conference was not meant as a hateful strike against men but rather as a one-off, a way to make a splash and try something new. The spirit was one of support and camaraderie. I get it. There is no denying that if there are dominant men in the room who love to hear the sound of their own voice, I will often restrain my feedback and comments. I simply don’t need to show how smart I am to know I am smart.

I fully understand the yearning to have a safe place to share gender-specific vulnerabilities, frustrations, and concerns, without a man interrupting and saying, “All you need to do is…” (Okay, you can throw your laptop now.)

I think men are great, heck I even married one. But holding events that are specifically women-only is narrow-minded. It’s not the right way to address a burning and compelling narrative today; women longing for gender equality. Inching closer to this goal does not have to involve a purposeful exclusion of one gender. Here’s why women-only events won’t get us where we want to go:

1. It is against the law. Sex discrimination lawsuits and violations of civil codes are being reported across America by men, claiming their rights have been violated. Roll your eyes all you want, but the law will fall on the side of those who were discriminated against. Despite best intentions, and the ultimate goal of hosting a supportive and nurturing event for professional women, these women-only events will continue to fall under severe scrutiny. According to the law, a women-only event is akin to “Caucasian Night”, or “Heterosexual Night”. Yuck. Those sound awful, don’t they? By law, women-only events fall into a similar category.

A few years ago, I attended The Texas Conference for Women, the largest professional women’s conference in Texas. I was surrounded by 7,500 attendees. I would guess about 14 of the attendees were men. But you know what? I loved that there were men there. I saw them looking around, amazed, and probably a tiny bit scared. We were captivated and inspired by the keynote speakers, we roared with laughter, our eyes welled with tears, we exchanged business cards, we networked, we acquired new customers, we supported each other, we collaborated with our challenges. And those 14 men saw what it looks like to see 7,486 women kick butt (in a strictly professional and businesslike manner). What did they learn? What stereotypes disintegrated?

Instead of telling men they were not welcome at The Texas Conference for Women, and they aren’t privy to the offers, knowledge, lectures, discounts, and swag, organizers made it clear it was a day to prioritize women’s voices. There was a clear sense of gender partnership. And because they let participants know that the event is centered around and primarily attended by women, it allowed everyone to grow, despite one’s sex.

3. Men need to pay attention to the woman behind the curtain.There are innumerable benefits to inviting men into the room when we talk about women’s issues. We need to bring men to the table because gender equity is not a woman’s problem, it’s a social problem. We need to hold events where women AND men are listening, collaborating, learning. It’s time to challenge stereotypes and bias.

There is a saying that “You can’t be what you can’t see”. I would add, “You can’t support what you don’t see.” Let’s lift up the curtain on our frustrations and fears and rage. If you’re a woman, tell the men in your life how gender inequity has directly affected you, not in a defensive way, but in an informative way.

And finally, I have a selfish reason for disliking women-only public events: if the event is “women-only”, I’m invisible to half the people I need to talk to. If I believe strongly in the things I present at conferences (and I always do), then everyone should hear what I am saying.

As an example, when I need to talk to my tiny and sensitive six-year-old daughter about how to handle a bully, I bring her twin brother into the room for this conversation as well. Just because he has never been bullied doesn’t mean he can’t help come up with a few good solutions, or at least witness her current challenges. Plus, now he knows to keep his sister on his radar at recess, and if he sees something that isn’t right, he can step in and ask if she needs help. If he doesn’t know right from wrong, or that it bothers her so much, how could he know his support is needed?

For a gender balance to occur, we need to talk about and celebrate social, economic, cultural and political achievements of women. But we also need to collectively support a call to action for accelerating gender parity and human rights. The key to our success is a collective effort.

I can’t lie, there are plenty of reasons to hold women-only events. But I do believe that ultimately women-only events do more harm than good by keeping the challenges of women an obligation and burden of women alone. Gender equity has made huge strides over the last few decades, but we have much further to go. Let’s grab a seat at the same table and figure it out together.