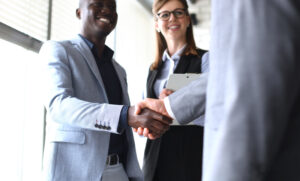 As coaches, we sometimes have clients with big egos and high opinions of themselves—in short, real Type A personalities. Sometimes they have trouble getting their ideas across to others or connecting with audiences. This is confusing for them (they are, after all, subject-matter experts), as having hard-charging personalities has helped them be successful and often sought-after speakers. They ask: What’s not working here? Why do some audiences tune me out? Why do I get the cold shoulder?

It could be several things, but one thing often overlooked by coaches and those they coach is the absence of humility and gratitude. Recently, a very senior executive and I had a breakthrough. Like that old song says, try a little tenderness. As a speaker, this client came off as a real smarty pants; he was flippant, arrogant, and it was easy not to like him. Being vertically challenged may have played a role here; he always had to be better to compensate for his lack of physical stature, or so he thought. As his coach, just as a good chef adds certain ingredients, we added certain amounts of humility and gratitude as themes in the early part of his talks and revisited those themes at the end of his speech.

But how does one pull this off? He began by saying how proud he was to be on such a diverse and talented team. He felt honored to be a senior leader, and on a personal note, he acknowledged how grateful he was to have been chosen years ago to have a role in the organization. Further, he was appreciative of the lifestyle his position afforded his young family. All these ideas, said before he got to the “business” of his talk, went a long way toward presenting him as a real person to his colleagues and peers. He already had a vast reputation as a huge moneymaker; some even called him “The Machine” as he made money like crazy year after year. In his closing, he revisited the themes, saying, “I am very lucky to be here with you and thank all of you for the roles you play to help me, us, and our investors.” Of course, these words must be delivered with genuine warmth and sincerity or they will be meaningless.

By adding a touch of humility and gratitude, he changed many people’s perceptions of him and convinced them that, indeed, he was a real person who was finally showing a more human side. The feedback he started getting was very positive; there was much more interaction and discussion during Q&A time. It all came from small changes that allowed him to be seen in a different light. Warming up to people was not the big challenge he had been avoiding, and it paid nice dividends as a speaker. Coaches and speakers should try it!